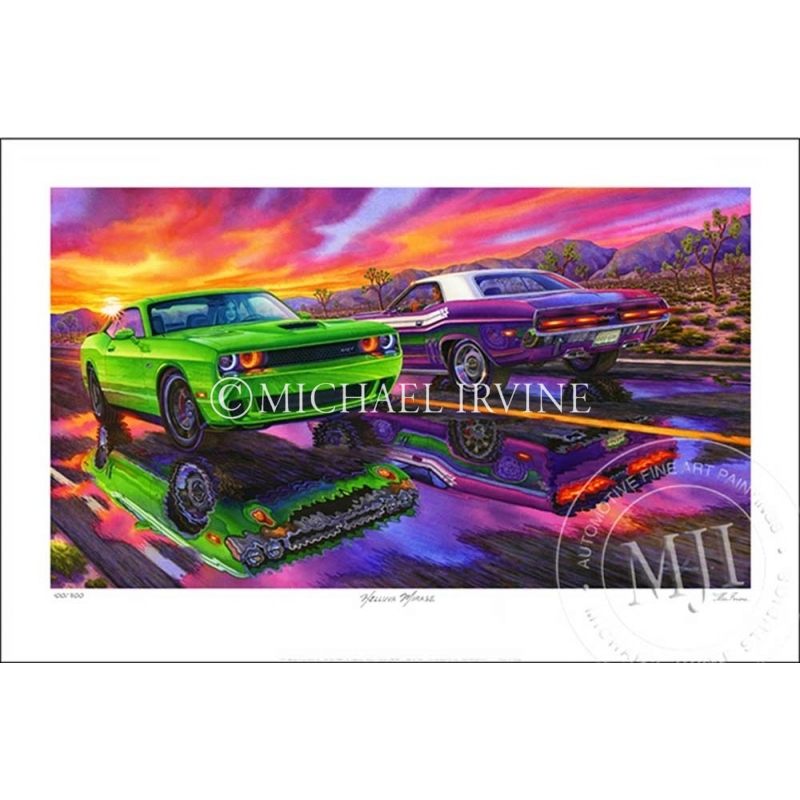 “I was really impressed with the retro body styling of the Challenger when it was first released in 2008. Dodge really nailed it, right down to the available paint colors. Now, 7 years later, they've done it again, and even better. At 707 hp, the 2015 Hellcat is an impressive beast that's easy to like. Whenever I see an example of this modern muscle on the road, I think how awesome it is that although the cars are technologically advanced and computer enhanced, they have remained true to the original pony car look — short rear deck, long hood and large aggressive front grill. Modern muscle cars like the Hellcat bring together the past and the future, and ignite excitement among car enthusiasts young and old!"- MICHAEL IRVINE

A mirage is an optical phenomenon by which an image appears displaced of its true position as a result of spatial variations. On a hot desert road it is caused by the refraction of light from the sky by heated air. The image appears real and even possible.

In this vivid and dramatic painting, Michael takes you to an open stretch of highway in Joshua Tree National Park, where two divergent desert ecosystems come together — the Mojave and Colorado. It's at this meeting point where a stunning mirage captures the aggressive lines of two distinct, and yet reminiscent, Dodge big block beasts — the powerful 2015 SRT Hellcat and it's classic predecessor, the 1971 Challenger RT 440 Six Pack. High impact colors and the illusion created by the mirage, give us a remarkable glimpse at both cars from the front and back!

Where these two distinct yet similar forces meet, both natural and built by man ... there appears one "Helluva Mirage".

Featured on the cover of Mopar Collectors Guide.