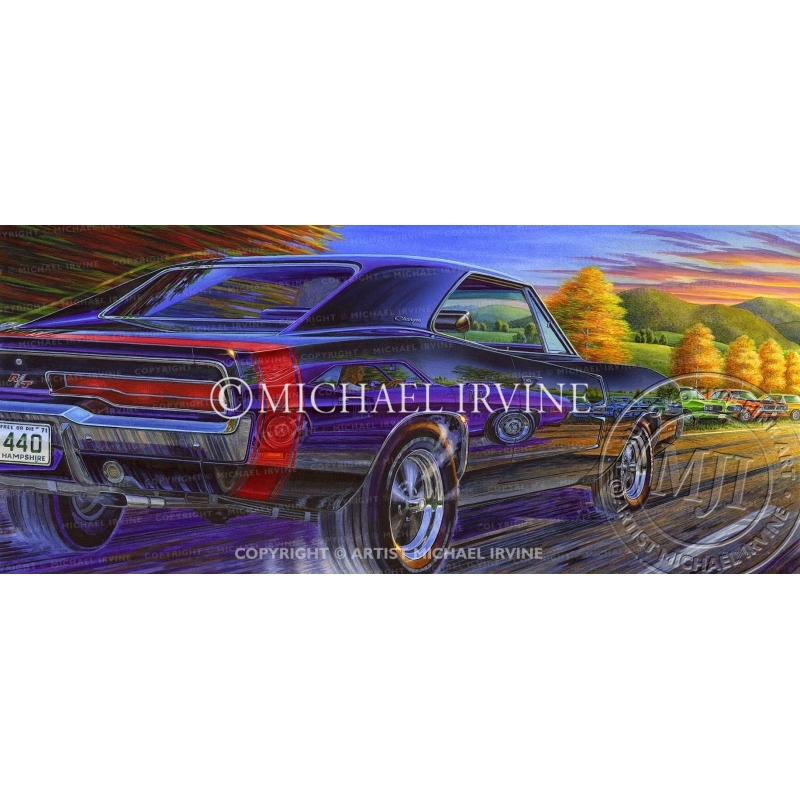 “I chose a long, low view to showcase the ’69 Charger’s exquisite body lines while focussing on the rear end … a view most competitors are familiar with. Unless, of course, the competitor is a 1971 Cuda sporting its own 440 and a six pack set up. Let the races begin!"- MICHAEL IRVINE

"Prove It!" — Dodge versus Plymouth

As the muscle car wars between manufacturers were in full swing by the late 1960s, competition from within was equally fierce. GM had Chevrolet, Pontiac and Oldsmobile. Ford had Mercury and Chrysler had Dodge and Plymouth. Each division did it’s best to create their version/vision of what a muscle car should be, by trying to out-perform, out-design and ultimately, out-sell, its competitors — all while providing a multitude of choices for those seeking power and style.

The first re-design of the Dodge Charger brought us the sleek ‘coke bottle’ style fuselage which would only last 3 years. With its long, uninterrupted body lines and gloss black paint, the 1969 Charger makes the perfect mirror to reflect its surroundings. Which, on this day, is a 1971 Cuda, along with a trio of high performance Plymouths, including a 1968 Barracuda, a 1971 GTX and a 1969 Road Runner. On a secluded country road, these brand-loyal enthusiasts face-off in a friendly game of ‘who’s faster’, while a 1970 Superbee, a 1971 Demon and a 1968 Dart wait their turn to “prove it!”

SPECIAL RELEASE COLLECTOR EDITION: A limited number of the reproductions (200 Limited Edition Prints, 5 Artist Proofs and 10 Gallery Edition Canvases) have been imprinted with a remarque of a 440 Magnum Engine Detail and are accompanied by a Painting Study of the piece, signed by Michael.