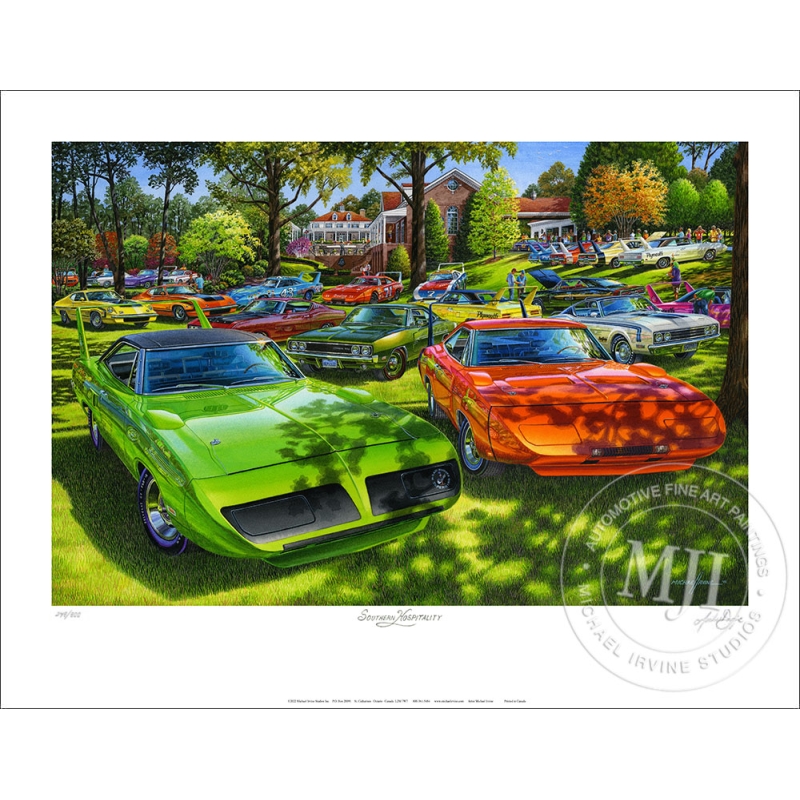 “Our good friends and ambassadors of all things muscle car-related, Tim and Pam Wellborn, graciously opened the Wellborn Musclecar Museum and, more significantly, their personal property to over 200 cars, their owners, and guests to host the 50th Anniversary of the Aero Cars. I was honored to be part of that historical event."- MICHAEL IRVINE

"Southern hospitality ... a feeling of being sincerely welcomed as a guest or a long lost friend; a way of life that lets people be as warm as the climate. It's an easiness in speaking with total strangers or anyone, a unique friendliness encompassing the whole way of life in the deep south. It's not something one does, it's the way one is." - DEE JACKSON

From Torino King Cobras to Talladegas and Cyclone Spoiler IIs, to Superbirds, Daytonas, and Charger 500s, this painting captures just a sample of the historic 50th Anniversary of the Aero Car Reunion on the estate of Tim and Pam Wellborn.

As Michael says, "inspiration for a painting can come at any time, you just have to take notice of it." A case in point was this incredible event. Walking the grounds loaded with beautiful cars, and smiling faces, along with the great weather, gave Michael that feeling that the potential for a painting was right there.

At the time of the reunion, Michael had just completed the painting "World Record" and had another painting already on the drawing board. He focuses on only one painting at a time, so he put the creative process, for what would become "Southern Hospitality," on hold. Flash forward to more than 2 years later, and he found himself watching author Ryan Brutt's YouTube video of the event. It brought him back to that moment in late October in Alexander City, Alabama, sharing good times with great people.

Knowing which cars he wanted to include — all the cars in the painting were present at the event — for color balance and composition, Michael took artistic license with their locations and positioning. There is no photograph of this scene! "This painting represented a lot of challenges for me. I try to put the viewer up close and personal with the cars and I wanted to capture as much of the scene as possible while remaining true to the grounds. To do that, I had to foreshorten the building that houses the Wellborn's personal vintage Hemi cars and compress the grounds to a more condensed view. Equally challenging were the rolling hills of the estate and the different elevations at which the cars were positioned ... some low, some high, some in a gully. To achieve realistic scale and correct perspective, I had to do dozens of drawings to get to the final linear version before I went to color, " says Michael.

At one point, Michael considered the impressive Wellborn Musclecar Museum for the painting, after all, some of the festivities were held there, but ultimately the fact that the Wellborns hosted friends as well as strangers on the grounds of their stunning estate, made his decision for him. Finally, with the title, Michael wanted to give credit where it was due. Incredibly gracious hosts, the Wellborns are the epitome of "Southern Hospitality." 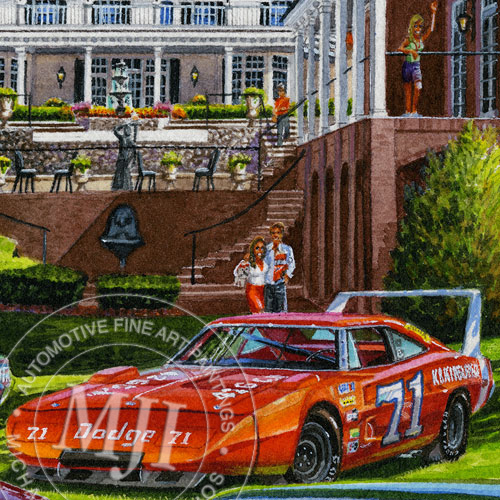 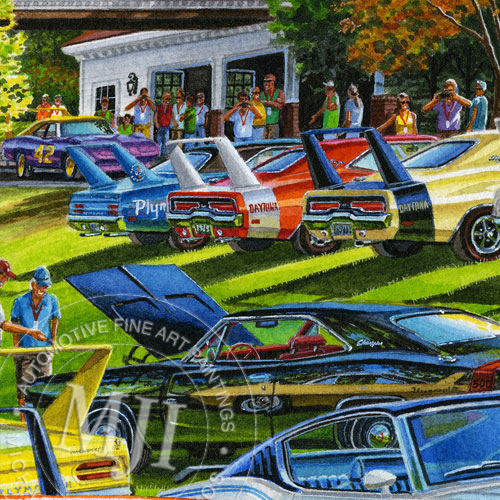 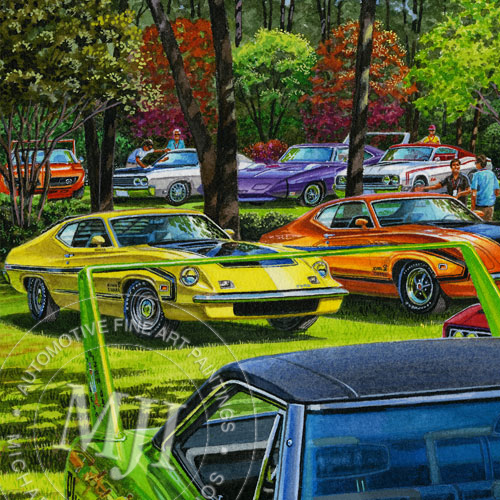 Some of the details (left to right): The Wellborns ... taking hospitality to the next level! • Action under the Wellborn's car port. • The rare Torino King Cobra and another field of cars.