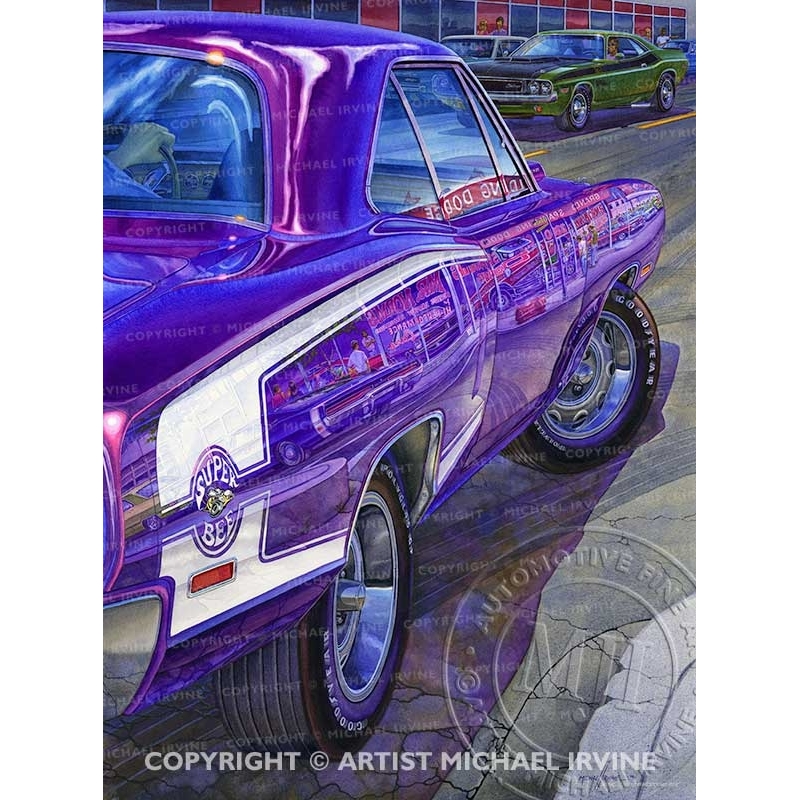 “I'd been thinking about a Grand Spaulding Dodge painting for a while, but really wanted to do something unique. Meeting Mr. Norm last year, ultimately was the catalyst that got me going ahead with it. There is so much history—Mr. Norm, together with his dealership, are icons and for good reason. He was involved in drag racing, had the first Dyno machine in the mid-west, created the need for high performance vehicles, and owned the biggest dealership of fleet cars and high performance Dodge cars and trucks in the 1960s and '70s. A marketing genius, he took the art of selling cars to new heights. Having had the privilege of spending some time with him and the opportunity to have him co-sign a portion of the edition, has made this painting one of my favorites."- MICHAEL IRVINE

I think the first month we sold about 35 cars. From that day on, it was totally performance. — NORM KRAUS (The High Performance King)

Sporting a eye-catching coat of—new for 1970—Plum Crazy paint, a powerful 426 Hemi under the hood, and after a long test drive (there's less than a ¼ tank left according to the fuel gauge) this Dodge Super Bee has found a new owner as it turns "right on Spaulding" Avenue.

As the option lists grew, along with horsepower and color choices, 1970 was an exhilarating time to buy a new car, especially a Dodge. And the best place to buy one was at Mr. Norm's. Located in Chicago, at the corner of Grand Avenue and Spaulding Avenue, his dealership, Grand Spaulding Dodge, had the established reputation of offering the best in high performance cars and trucks. Today, 'Mr. Norm' and 'Grand Spaulding Dodge' are icons of the automotive industry.

In his unique, dramatic and enthralling style, Michael has chosen to reflect Mr. Norm's Grand Spaulding Dodge dealership in the side of the Plum Crazy Super Bee. In the reflection, Michael has captured the excitement and energy of the always busy dealership on a sunny afternoon. Arms crossed, Mr. Norm looks out over a man and his son checking out the 1970 Cuda and Six Pack Super Bee in the showroom, while others decide on which of the many cars on the lot will be their favorite ride!

Michael's painting titles are legendary — they give deeper meaning to the finished piece. "Right On Spaulding!", is a double (or in this case triple) entrendre — not only is the Super Bee making a right hand turn, but Spaulding Avenue only runs one way, so there's only one way to turn on to it — the 'right' way. And, if you give a thumbs up or fist in the air while saying "right on Spaulding", as they would have back in 1970, you're giving a shout out to the dealership itself!

SPECIAL EDITION RELEASE: A limited number of the reproductions have been co-signed by Mr. Norm and have been imprinted with a remarque of a painted renditition of his "Grand Spaulding Dodge" logo. (SOLD OUT)

[ Featured on the cover of Mopar Collector's Guide. ]